A study published in the Journal of Aging and Physical Activity offers evidence and hope.  MCI and Dementia deplete not only cognitive function but also physical function and the ability of the brain and body to work effectively together.  The University of Buffalo study, done in collaboration with the William-Emslie Family YMCA in Buffalo New York, studied the impact of SMARTfit’s gamified dual-task training technology and programming on a group of older adults with Mild Cognitive Impairment.

A University of Southern California (USC) study is the first to describe the benefits of employing an innovative gamified training platform, SMARTfit, which facilitates visuo-tactile interaction.  Gamification enhances engagement for individuals and meets the unique challenges that Parkinson’s Disease presents due to the progressive decline of motor and cognitive ability. The study, coauthored by Dr. Charles Liu and Dr. Beth Fisher, was a joint collaboration with USC’s Neurorestoration Center, Keck School of Medicine, and the Division of Biokinesiology and Physical Therapy.

Dr Charles Liu explains why he focused on Parkinson’s Disease for this research: “Many researchers have established the immense value of physical therapy (PT) for Parkinson’s Disease (PD), including the coauthors of this paper. In fact, PT has become an essential component of PD treatment. However, good physical therapy is often not available to large numbers of PD patients, and this has been exacerbated by the COVID-19 global pandemic. In this study, we wanted to explore the feasibility of using a novel device called SMARTfit as a tool for therapists to use dual-task cognitively engaged training in treating PD patients. Although the study included only a small cohort of patients, the results were quite promising, showing that dual-task training using SMARTfit may be better than single task standard PT. Furthermore, SMARTfit dual-task training can be delivered by the therapist in a physical distancing way. We look forward to exploring this concept further.”

Due to the pandemic, not all patients were able to complete the rigorous 20-week program. Despite this, the results proved significant and compelling, with patients using SMARTfit’s gamified Dual-Task Training (DTT) scoring higher than those utilizing traditional single task physical therapy in four out of five standardized measurements, with improvement in perceived disability in 75% of participant

Conclusions: In a small cohort of PD patients, it was found that, compared to traditional therapeutic methods, the use of SMARTfit technology as a rehabilitation tool implementing gamified Dual-Task Training is not only feasible and safe, but also indicates promising new directions in the pursuit of greater efficacy in the treatment of PD.

Parkinson’s Disease is the second most common chronic neurodegenerative disease. It is progressive and affects nearly one million people in the United States and more than 10 million globally, according to statistics published by the Parkinson’s Foundation [1], which also estimated that 60,000 new cases of PD are diagnosed annually in the United States alone. 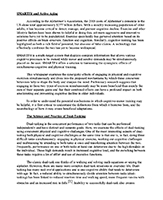 According to the Alzheimer’s Association, the 2018 costs of Alzheimer’s dementia in the US alone total approximately $277 billion dollars. With a steadily increasing population of older adults, it has become critical to detect, manage, and prevent cognitive decline. 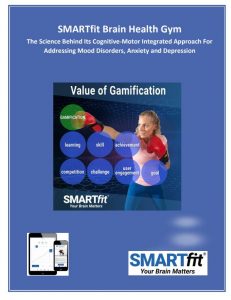 SMARTfit interactive brain health training solutions offer a unique approach to improving the physical, cognitive and mental health of individuals who usually don’t work out or play sports.  The key to engaging these populations is the use of gamification to immerse participants in playing exercise games that are easy to learn yet engaging, with enough challenge to trigger the desire to achieve and improve.